Several years ago, two men – Jack and Bill (surnames
unknown) – were exploring in Death Valley, near Wingate
Pass, when one of them fell through the bottom of an old
mine shaft.

They claimed to have found themselves in a natural
underground cavern which they followed about 20 miles
northward into the heart of the Panamint Mountains.

“To our amazement,” they reported, “we found ourselves in
a huge, ancient, underground cave city.

“As we explored, we came upon several perfectly preserved
‘mummies’ They wore thick arm bands, and had gold spears.

“The place seemed to have been abandoned for ages, except
for the mummies. The entire underground system looked
very ancient.

“It was apparently once lit by an ingenious system of
lights fed by subterranean gases.

“In one spot was a polished round table. The thought
crossed our minds that it may have been part of an
ancient council chamber.

“There were also large statues of solid gold. And stone
vaults and drawers full of gold bars and all sorts of
gemstones.

“We were intrigued by some heavy stone wheelbarrows. They
were so perfectly balanced and scientifically-constructed
that even a child could use them.

The men reported that throughout the city were huge stone
doors which were almost perfectly balanced by counter-
weights.

They followed the caverns upwards to a higher level. The
caverns ultimately opened out onto the face of the
Panamint Mountains, about half-way up the eastern slope.

There were a few exits in the form of tunnel-like quays.

It appeared obvious that the valley below was once under
water. After some thought, they concluded that the arched
openings were ancient ‘docks’ for sea vessels.

Far below in the valley, they could pick out Furnace Creek
Ranch and Wash.

The explorers brought out with them some of the treasure
and tried to set up a deal with certain people, including
scientists associated with the Smithsonian Institute. The
idea was to gain help to explore and publicize the city
as one of the ‘wonders of the world’.

However, to their bitter disappointment, a ‘friend’ stole
the treasure (which was also the evidence).

And worse, they were rejected and scoffed at by the
scientists when they went to show them the ‘mine’
entrance and could not find it. It appeared that a recent
cloud-burst had altered the entire landscape. It did not
look like it had been before.

When Bill and Jack were last seen, they were preparing to
climb the east face of the Panamints to locate the
ancient tunnel openings or quays high up the side of the
steep slope.

But they were not seen again.

In 1946 a retired physician by the name of F. Bruce
Russell told a similar story.

He claimed to have discovered strange underground rooms
in the Death Valley area in 1931. He spoke of a large
room with several tunnels leading off in different
directions.

One of these tunnels led to another large room. It
contained three mummies.

He identified artifacts in the room as similar in design
to a combination of Egyptian and American Indian.

What struck him most about the mummies though was their
size – more than eight feet tall.

Dr. Russell and a group of investors launched “Amazing
Explorations, Inc” to handle the release, and profit,
from this find.

But, Russell vanished. And although he had personally
taken his friends there, they were never able to find the
caverns and tunnels again.

The desert can be very deceiving to anyone not used to
traveling it.

Months later, Russell’s car was found abandoned, with a
burst radiator, in a remote area of Death Valley. His
suitcase was still in the car.

An underground city newly discovered in Turkey’s Central Anatolian province of Nevşehir, which is located under the Nevşehir fortress and the surrounding area, may be the biggest archeological finding of 2014, which is soon to end. AA Photo

With 2014 soon coming to an end, potentially the year’s biggest archeological discovery of an underground city has come from Turkey’s Central Anatolian province of Nevşehir, which is known world-wide for its Fairy Chimneys rock formation.

The city was discovered by means of Turkey’s Housing Development Administration’s (TOKİ) urban transformation project. Some 1,500 buildings were destructed located in and around the Nevşehir fortress, and the underground city was discovered when the earthmoving to construct new buildings had started.

TOKİ Head Mehmet Ergün Turan said the area where the discovery was made was announced as an archeological area to be preserved.

“It is not a known underground city. Tunnel passages of seven kilometers are being discussed. We stopped the construction we were planning to do on these areas when an underground city was discovered,” said Turan.

The city is thought to date back 5,000 years and is located around the Nevşehir fortress. Escape galleries and hidden churches were discovered inside the underground city.

Stating that they were going to move the urban transformation project to the outskirts of the city, Turan said they had paid 90 million Turkish Liras for the project already, but did not see this as a loss, as this discovery may be the world’s largest underground city.

Hasan Ünver, mayor of Nevşehir, said other underground cities in Nevşehir’s various districts do not even amount to the “kitchen” of this new underground city.

“The underground city [was found] in the 45 hectares of the total 75 hectare area that is within the [urban] transformation project. We started working in 2012 with the project. We have taken 44 historical objects under preservation. The underground city was discovered when we began the destruction in line with the protocol. The first galleries were spotted in 2013. We applied to the [Cultural and Natural Heritage] Preservation Board and the area was officially registered,” said Ünver. 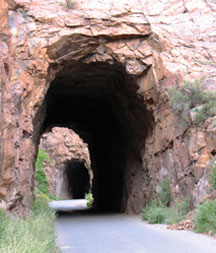 The Gilman tunnels were originally blasted out of rock in the 1920s for a narrow-gauge logging railroad that used to haul timber out of the Jemez. There was a sawmill near Gillman but it came much later (around 1948). At some point they enlarged the tunnels so that logging trucks would fit. Perhaps this coincided with the building of the sawmill in Gillman. We found no record of when the railroad tracks were dismantled, but many tracks in the west were torn up during WWII). Railroading and logging artifacts can be found, even up towards Cuba.
Just past the tunnels the pavement ends. There are great views of the Guadalupita and Virgin mesas.

The canyon is a popular recreation area for camping, fishing, hunting, hiking, and rock climbing. It provides habitat for threatened and endangered species. The road parallels the Rio Guadalupe. The fast tumbling, boulder strewn canyon river is home to wild browns in the 10-14 inch range. There is a section designated as quality trout waters.

At Bernalillo, take exit 242 off I-25, go west on Highway 550. From San Ysidro, drive north on Highway 4. After the Jemez Valley School look for SR 485 to the left. After taking this left turn, follow the road through Gilman, continuing up the canyon through the tunnels. There are numerous turnouts for sightseeing and photography. Past the tunnels you are on dirt road, Forest Service Road 376. At Porter crossing (where you cross the Rio Guadalupe), you can continue on FR 376 to Fenton Lake and Jemez Springs, or turn left to Cuba (we hear this road is pretty rough in places).