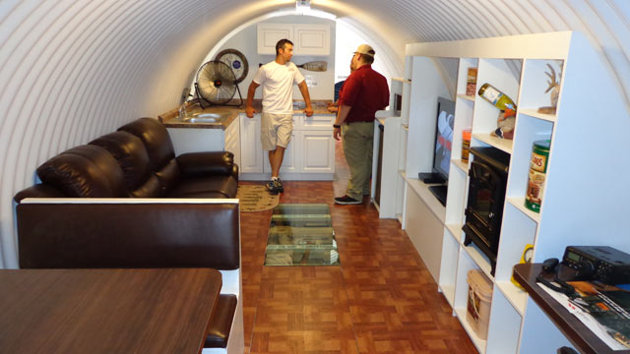 ============================================================================
The latest real estate boom to sweep America comes with all the trappings of luxurious living: custom-built swimming pools, gyms, full-length basketball courts, and even airplane hangars.
The only catch is that this time, the features are all buried underground.
The boom in bomb shelter sales over the past 15 years has taken the spartan 1950s notion of a fallout shelter and given it a makeover, according the owners of three companies that make and sell shelters.
Now, custom installations can create 100,000 square foot underground dwellings that could hold dozens of people for months or years.
“You can have all your major amenities: TV, high power and high voltage (appliances)… horticulture rooms where you can grow vegetables and gardens, a full shower, all the amenities of your full home. We’re not limiting what people can do,” said Brad Roberson, marketing director for Rising S Company, which builds and installs custom shelters.
The basic requirements that most owners want in a shelter include air filtration systems to protect from nuclear, chemical and biological warfare, ventilation systems and a toilet system, as well as blast-proof and fallout-proof casing on the outside, he and other makers told ABC News.
But in addition to that, shelters can have “secret doors, hidden passageways, panic rooms, bulletproof glass,” running water, toilets, showers, and electricity, according to Roberson.
“Budget and imagination are the only limits,” he said.
A bunker on the small side of 10 feet by 20 feet starts at about $54,000. They go up from there to $10 million, Roberson said.
At Utah Shelter Systems, corrugated pipe shelters start about $50,000 for an 8-foot diameter by 32-foot length shelter. They go up to about 490,000 for a 12 –foot by 50-foot run, Packer said.
Rising S recently built an $8 million shelter in Colorado that measured 15,000 square feet, with camouflaged elevators and handicap ramps to provide access to a disabled client. They placed a log cabin over the top of the bunker to serve as a safe house. Behind the logs will be a bulletproof half-inch steel plate protecting the structure, he said.
“Everything above ground is camouflaged by an old barn or water silo that sits above it,” Roberson said. “He’s got a basketball court, and airplane hangar large enough to park 2 Cessna planes that will open up to face a hill or mountain. He’s got a large gym, 22 rooms, he has a large family.”
In the past 15 years, companies that make and sell underground bunkers have sprouted up

Bomb Shelters Make a Comeback Amid Nuclear, Economic Uncertainties around the country, mainly in the West and South, according to the founders of three companies.
“I think probably around the year 2000 we started seeing quite an increase in sales,” said Sharon Packer, co-owner of Utah Shelter Systems in Draper, Utah. Her company installs shelters made out of 10-foot-wide concrete pipes linked together to create rooms six feet underground.
“People were concerned about the very real issue of possible effects on our computers. ‘Y2K’ started the upsurge, and for 13 years it’s been a good steady business,” Packer said. “After 9/11 we had a big surge in the East, in New York.”
Recently, fears of a nuclear armed Iran or North Korea have stoked the fear that a nationwide disaster would force residents to retreat to safety underground, to wait out nuclear fallout or social instability, Packer and others said.
“It’s sad to say, the worse the state of affairs get, our government gets, the closer we see these policies the government is forcing down our throats, and foreign threats as well. It inflames peoples’ desire to give themselves a retreat,” Roberson said.

Buying Bomb Shelters Like Buying Insurance
“People are awakening to the threat,” Packer said. “A lot of it is the terrorist attacks, a lot of it is the economy. People are concerned about having a government failure. Some of it is Earth changes.”
Brian Duvaul, the sales manager at American Safe Homes, said that in the last quarter of 2012 his businesses saw a 25 percent jump in calls that he attributed, in part, to the Mayan calendar ending and fears about the end of the world. He also said he had previously seen jumps in sales during the anthrax scares of 2002 and 2003, and after the Fukushima nuclear plant meltdown in Japan in 2011.
“People don’t always come out and tell us why they’re doing what they’re doing. We had one guy tell us he had to get a blast door for his wife’s birthday, which happened to be one day before the Mayan calendar ended,” Duvaul said. “I didn’t believe him, but we got him the door.
Bomb shelter manufacturers said that their average customer is a middle-aged, affluent man, though beyond that, all different types of people have come looking for protection from future disasters.
“The purchasers, they understand the need for it. It’s almost like buying insurance. You don’t know if we’ll have a scenario in our lifetime, though we suspect it, that will drive us underground,” Roberson said.
“It seems to be not as much about fallout,” he said, explaining the motivation for installing a shelter. He said that logically, most people won’t be within range of nuclear fallout,
“It won’t matter how close you were to the blast radius. It’s going to be the ‘haves and have-nots’, and if they need it they’re going to take it, to come into your house and burn it down,” he said.
Packer of Utah Shelter Systems said that of her customers, she has seen few traditional “survivalists,” and many more ordinary, highly-educated professionals coming to her in case of a worst-case scenario.
“The vast majority are professionals,” Packers said. “They are very well educated, a lot of doctors. The majority of them are physicians, and attorneys, a lot of engineers, all of whom understand the real threat.”
Spencer Weart, the author of the “The Rise of Nuclear Fear,” said that bomb shelters are a logical act for people who really believe there will be a nuclear war or some type of disaster. Weart has catalogued America’s nuclear fears dating to the 1950s.
“It’s a way of putting money where your mouth is, isn’t it?” Weart said. “If you believe there’s actually going to be a nuclear war, you’re kind of in a tough situation. If you’re convinced of that, it makes sense to make yourself a fallout shelter. So most people convince themselves there isn’t going to be a nuclear war. It’s optimists versus pessimists.”
The rise in popularity of bomb shelters shows a persistent strain of skepticism about community in America, he said.
“The thing about a bomb shelter is it assumes a societal breakdown, and this is one of the great myths that’s been propagated since the 19th century, that society will break down and it’s every family for himself, which is not what happens in a disaster,” Weart said.
“People tend to pitch and help each other, even at Hiroshima and Nagasaki. It ties in a fundamental distrust of human nature. It shows a complete distrust in society and the social system.”