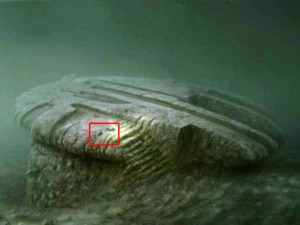 Is the Baltic Sea Anomaly a 14,000 year old alien spacecraft that crash landed?

In what seems to come straight out of a Star Wars film, something like a crashed Millennium Falcon has been spotted at the bottom of the Baltic Sea.

The image first appeared on the sonar of Ocean X, a private treasure hunting company, a couple of years ago.

You can see its strange and artificially circular shape. It looks something like a UFO.

Also note the streak marks behind it. Look at the way they are shaped….it looks like whatever this thing was crashed and skidded along the ground before coming to a stop.

The team that discovered this object noted that when their boat was directly above it some of their electrical equipment stopped working. When they sailed away , the equipment started working again.

The dive team that explored the sunken object also explained how the object appeared to have steps leading into an egg shaped entrance.

Parts of either the object or rock that had formed around it were dated to be around 14,000 years old.

Still, some experts say this could completely be a natural geologic rock formation.

But, to me at least, the way it stands out on a sonar scan, the steps and entrance the divers note, and the apparent skid marks that trail the object… a natural geologic rock formation seems like an unlikely culprit.

Just what is this object laying at the bottom of the Baltic sea? Could it be an alien spacecraft that crashed long ago?