Archaeologists have uncovered what may be the largest royal tomb found in more than a century of work on Maya ruins in Belize, along with a puzzling set of hieroglyphic panels that provide clues to a “snake dynasty” that conquered many of its neighbors some 1,300 years ago. 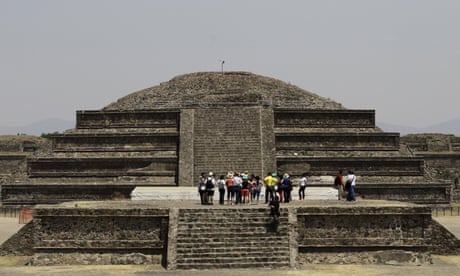 The tomb was unearthed at the ruins of Xunantunich, a city on the Mopan river in western Belize that served as a ceremonial center in the final centuries of Maya dominance around 600 to 800 AD. Archaeologists found the chamber 16ft to 26ft below ground, where it had been hidden under more than a millennium of dirt and debris.

Researchers found the tomb as they excavated a central stairway of a large structure: within were the remains of a male adult, somewhere between 20 and 30 years old, lying supine with his head to the south.

The archaeologist Jaime Awe said preliminary analysis by osteologists found the man was athletic and “quite muscular” at his death, and that more analysis should provide clues about his identity, health and cause of death.

In the grave, archaeologists also found jaguar and deer bones, six jade beads, possibly from a necklace, 13 obsidian blades and 36 ceramic vessels. At the base of the stairway, they found two offering caches that had nine obsidian and 28 chert flints and eccentrics – chipped artefacts that resemble flints but are carved into the shapes of animals, leaves or other symbols.

“It certainly has been a great field season for us,” said Awe, who led a team from his own school, Northern Arizona University, and the Belize Institute ofArchaeology.

The tomb represents an extraordinary find, if only for its construction. At 4.5 meters by 2.4 meters, it is “one of the largest burial chambers ever discovered in Belize”, Awe said. It appears to differ dramatically from other grave sites of the era. Most Maya tombs were built “intrusively”, as additions to existing structures, but the new tomb was built simultaneously with the structure around it – a common practice among cultures such as the ancient Egyptians, but uncommon among the Mayas.

“In other words, it appears that the temple was purposely erected for the primary purpose of enclosing the tomb,” Awe said. “Except for a very few rare cases, this is not very typical in ancient Maya architecture.”

Many Maya societies ruled through dynastic families. Tombs for male and femalerulers have been found, including those of the so-called “snake dynasty”, named for the snake-head emblem associated with its house. The family had a string of conquests in the seventh century, and ruled from two capital cities. Awe said the newly discovered hieroglyphic panels could prove “even more important than the tomb”, by providing clues to the dynasty’s history.

The panels are believed to be part of a staircase originally built 26 miles to the south, at the ancient city of Caracol. Epigraphers say the city’s ruler, Lord Kan II of the snake dynasty, recorded his defeat of another city, Naranjo, on the hieroglyph, to go with his many other self-commemorations. On another work, he recorded a ball game involving a captured Naranjo leader whom he eventually sacrificed.

Naranjo apparently had its revenge some years later, in 680AD, having the panels dismantled and partially reassembled at home with gaps and incorrect syntax – possibly deliberately, to obscure the story of the snake dynasties’ conquests. Fragments have been discovered elsewhere in Caracol and at a fourth site along the Mopan river, but Awe said the new panels could be “bookends” to the story of war and sacrifice in the ancient Maya world.

According to the University of Copenhagen’s Christophe Helmke, the research team’s epigrapher, the panels provide a clue for Kan II’s conquests – he appears to have dedicated or commissioned the work in 642AD – and they note the death of Kan’s mother, Lady Batz’ Ek’. The panels also identify a previously unknown ruler from the Mexican site of Calakmul, Awe said.

Helmke said the panels “tell us of the existence of a king of the dynasty that was murky figure at best, who is clearly named as Waxaklajuun Ubaah Kan” . This ruler reigned sometime between 630 and 640AD, and may have been Kan’s half-brother.

“This means that there were two contenders to the throne, both carrying the same dynastic title, which appears to have been read Kanu’l Ajaw, ‘king of the place where snakes abound’,” he wrote in an email.

The panels clarify what Helmke called a “tumultuous phase of the snake-head dynasty” and explain how it splintered between cities before dominating Maya politics in the region.

The panels identify the origin of the snake dynasty at Dzibanche, in the Yucatan peninsula of modern Mexico, and refer to the family’s move to their capital of Calakmul. Awe said Lady Batz’ Ek’ “was likely a native of Yakha, a site in neighboring Guatemala, who later married the ruler of Caracol as part of a marriage alliance”.

The researchers have had their work peer-reviewed for publication in the Journal of the Pre-columbian Art Research Institute.

Awe said it was not clear why the panels appeared in Xunantunich, but the city may have allied itself with or been a vassal state to Naranjo. The cities both fell into decline, along with other Maya societies, around 800 to 1,000AD, for reasons still mysterious but possibly including climate change, disease and war.

The city was called Xunantunich, meaning “stone woman” in the Yucatec Maya, long after its abandonment by original residents. The name derives from folklore around the city about a hunter who saw a ghostly, statuesque woman, dressed in indigenous garb, standing near an entrance to a temple called El Castillo – a storytouted by tourist sites today. The site was also once called Mount Maloney, after a British governor.

The temple is impressive in its own right, a stone structure that towers 130ft above the city’s main plaza, adorned with a stucco frieze that represents the gods of the sun and moon