The Pyramids of the Grand Canyon, its “Off-Limit” Areas, & Egyptian Relics

In a restricted area of the Grand Canyon there are pyramids & caves full of hieroglyphics and Egyptian relics. Many people do not know about them as this information has been suppressed by the federal government for about a century. (NOTE:  Some photos have been supplied for information purposes/examples of relics and are not from or at the Grand Canyon discovery.)

The “Isis Temple” of the Grand Canyon 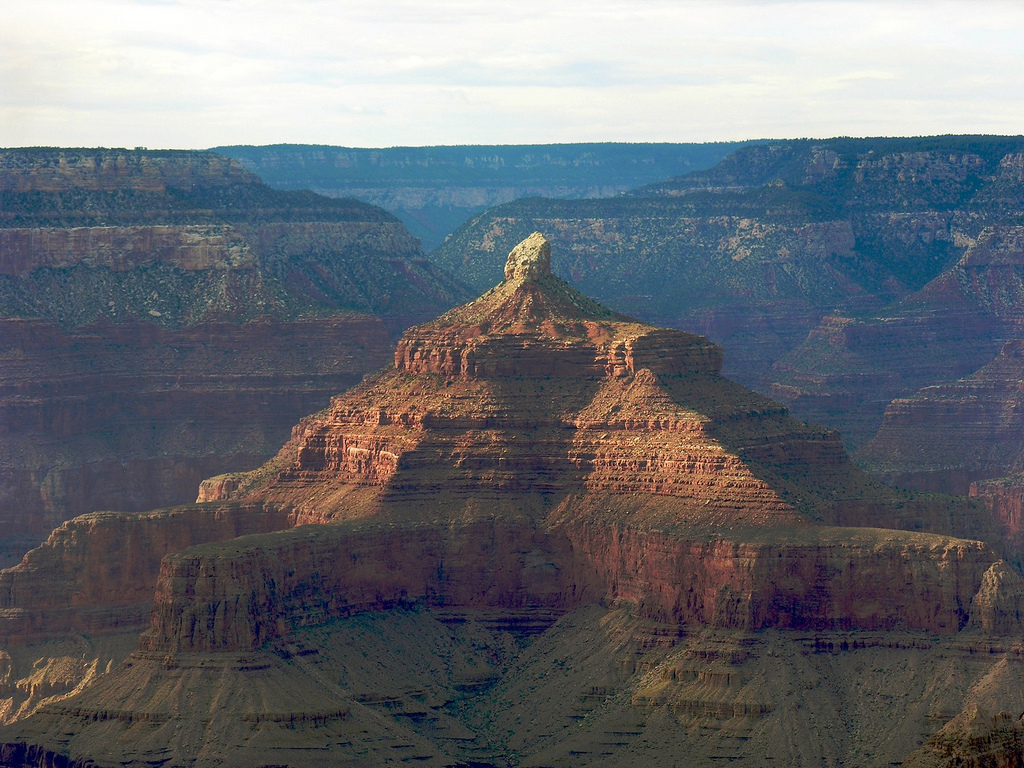 The sky over this area is restricted air space, the area surrounding this pyramid and cave on the ground is illegal (and treacherous) to navigate, and all official reports about this from the Smithsonian and elsewhere have been censored, modified, nullified, or retracted. This still did not stop people from attempting to visit this part of the canyon. Many have been arrested, and some have died attempting to climb to these sacred sites over the years. It has gotten to the point where the government feels it must have armed FBI agents guarding inside the entrance to the cave that is now known as Kincaid’s Cave. 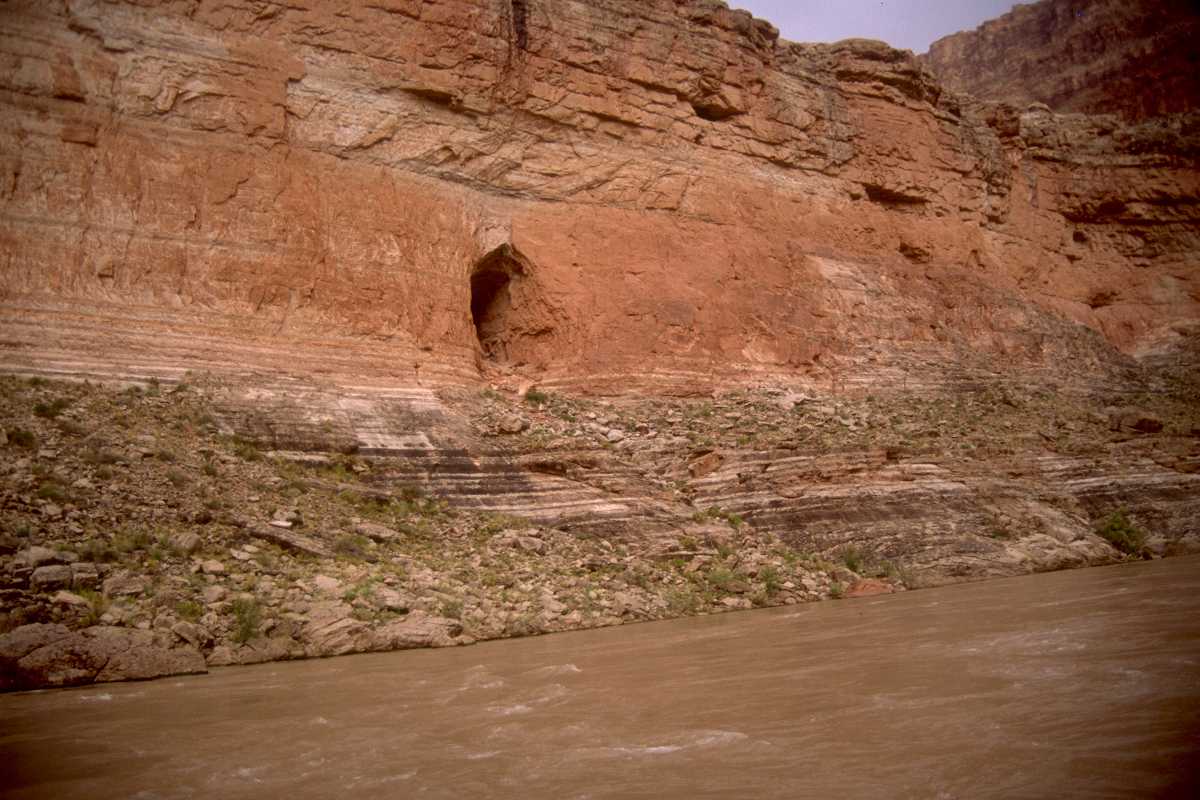 Kincaid’s Cave was named after G.E. Kincaid, who was the first to enter the cave. After retiring from the Marines, G. E Kincaid worked for S. A. Jordan as a archaeologist. S. A Jordan was sent to the Grand Canyon by the Smithsonian Institute to investigate information reported by John Westly Powell. The tunnel is presently on a cliff wall 400 feet above the Colorado River in the Grand Canyon. Archaeologists estimate the Man Made Cavern is around 3,000 years old. This cavern is over five hundred feet long, and has several cross tunnels to large chambers. This was the lowest level and last Egyptian “tunnel city” that was built in the Grand Canyon. Since the time that it was constructed, archaeologists estimate the Colorado River has eroded 300 feet lower. There were many Egyptian relics that were discovered in Kincaid’s Cave, one of which was a pure gold artifact for the Egyptian king named Khyan, Khian or Khayan. The relic is holding lotus flowers in both hands (native to Egypt). This was found in the first cross tunnel of the cave, which was in the exact same location as the shrines in the valley of the king’s tunnel cities, before the kings of ancient Egypt began to build pyramids and above ground cities. It was found that Khyan was a descendant of King Zaphnath in Egypt who may have been Joseph in the Bible. 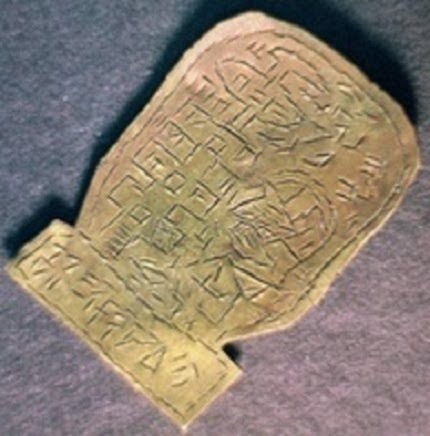 This Egyptian golden tablet was also discovered in the depths of this tunnel city led by way of Kincaid’s Cave. This tablet serves as a history book, including names that began with King Zaphnath coming to Aztlan, and information about his decedent King Khyan coming to the Grand Canyon. 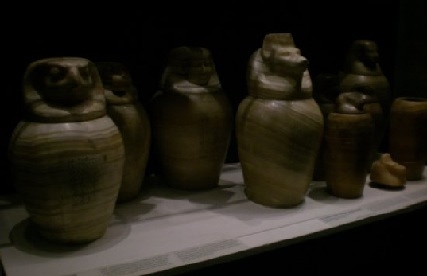 These pure gold artifacts from Kincaid’s Cave and these Egyptian urns from Powell’s Cave (pictured above) are some of the only historical artifacts from the Grand Canyon on display at the Smithsonian Institute in Washington D.C. Where did the rest of them go? At least some of them were obviously photographed and documented, but who knows what wasn’t. There is a reason why other relics that have been found here are not on display. The first American explorer/archaeologist that searched the Grand Canyon was John Westly Powell, who partnered with a native, Jacob Vernon Hamblin (both pictured above), who served in place of his late partner for the expedition. Powell worked as an explorer/archaeologist for the US Department of the Interior, and was the director of the Bureau of Ethnology at the Smithsonian Institution. In 1869, Powell traveled down the Green River to explore the Grand Canyon, and was the first person to report any archaeological information to the US government about natives that inhabited the Grand Canyon and their history. 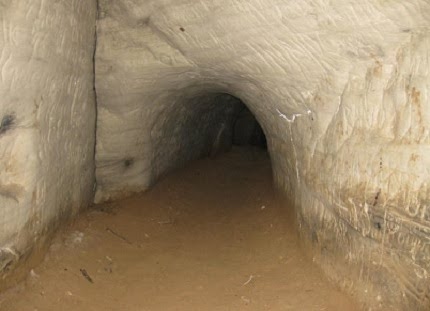 John Westly Powell discovered what is now called Powell’s Cave (cave entrance pictured above). The following is a quote taken directly out of a book that Powell published:

“In this Canyon, great numbers of man made caves are hollowed out. I first walked down a gorge to the left of a cliff and climbed to a bench of the cliff. There was a trail on the cliff bench that was deeply worn into the rock formation. Where the trail crossed some gulches, some steps had been cut. I could see no evidence that the trail had been traveled in a long time. I returned to our camp about 3:00 PM and the men had found more Egyptian hieroglyphics on cliff walls near the cave. We explored the cave and found this shrine and other artifacts. That evening I sent a team member to notify the Smithsonian Institute of our discovery. We continued to survey the canyon and discovered more Egyptian tunnel cities. I estimate in my report that I think upwards of 50,000 Egyptians had inhabited the Grand Canyon at one time.”

This was identified as a Shrine for Seteprene sometimes spelled Smenkhare, Seti, or Smenkare. King Seteprene was King Akhenaten’s son that began his rule at Saqqara , Shemau in 1336 BC, but only lasted 10 years, which was when he died on his last trip to Saqqara Egypt. The hieroglyphics Powell’s team found. This is a diagram for the Egyptian writing system when the ancient Egyptians came to the Grand Canyon. It was a school tablet used for teaching Egyptian children to read and write. 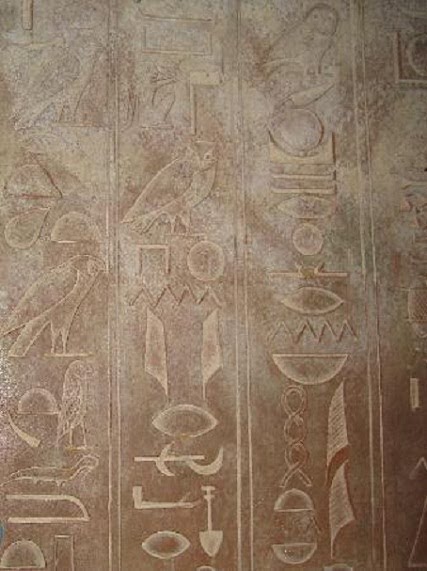 There were even crypts (sarcophagi) discovered. One of crypts was opened in the Grand Canyon to see if there were mummies in them before they were sent to the Smithsonian Institute storage building. They also discovered this rock cut vault with statues 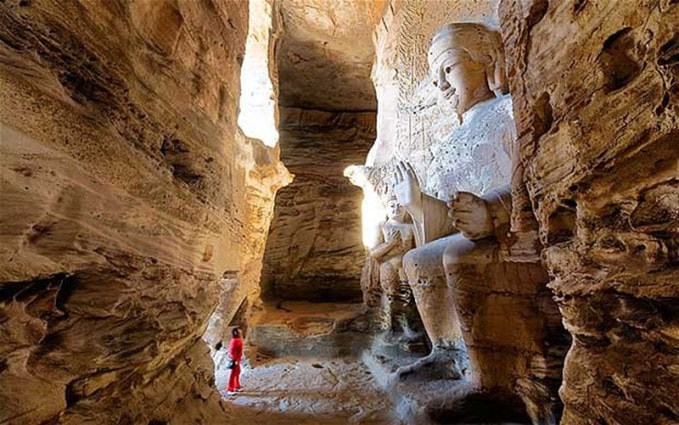 Did you know that all the monuments in the Grand Canyon are named after Egyptian pharaohs? This famous canyon in Arizona is actually an ancient array of pyramids. The sites even align with the same stars that the pyramids of Giza align with, the constellations of Orion and Pleiades. 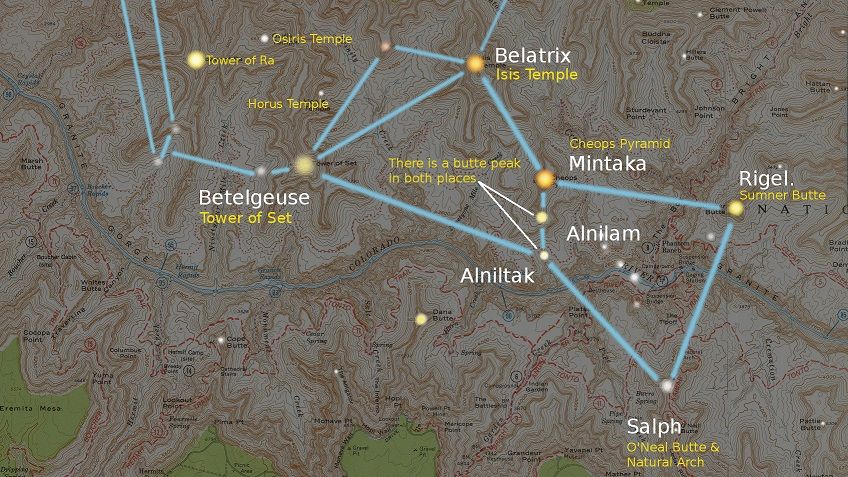 Zoroaster Temple in the Grand Canyon: named by Hopi Indians Another cave entrance in the canyon So you tell me, do the artifacts or writing found in the Grand Canyon appear to be created by native Americans, or by ancient Egyptians? The answer is pretty clear.