You might think that this is simply the remnants of a meteor that exploded on Earth but some UFO hunters are convinced it is actually a burnt alien body.

The charred remains form some kind of alien shape – if you are to believe extraterrestrial expert Scott C Waring – and they were discovered when the meteor fell to Earth.

Offering the use of words that people used to described the charred rock/alien as proof, Waring is convinced the truth is being kept from us.

He wrote on UFO Sightings Daily: “The people who found it all over said they found ‘parts’ all over the ground… they didn’t use the word pieces, which means they thought they looked like technology.”

As if that wasn’t all the proof we needed to finally find out if we are alone in the universe or not, Waring also claimed that the shape was definitely alien.

He added: “Now this was a such a powerful meteor that fell that power everywhere nearby blacked out, but I want to say this looks like ancient alien technology.

“Look at the body of what looks to be an alien skeleton drone, robot or space suit, because there is no way even an alien body could withstand falling from space and still look this good.”

Definitely alien technology. Not a rock.

Rocks worth 40 times the cost of gold? 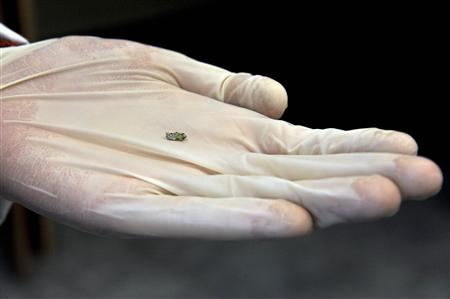 A meteor that exploded over Russia’s Ural mountains and sent fireballs blazing to earth has set off a rush to find fragments of the space rock which hunters hope could fetch thousands of dollars a piece.
Friday’s blast and ensuing shockwave shattered windows, injured almost 1,200 people and caused about $33 million worth of damage, said local authorities.
It also started a “meteorite rush” around the industrial city of Chelyabinsk, 1,500 km (950 miles) east of Moscow, where groups of people have started combing through the snow and ice.
One amateur space enthusiast estimated chunks could be worth anything up to 66,000 roubles ($2,200) per gram – more than 40 times the current cost of gold.
“The price is hard to say yet … The fewer meteorites that are recovered, the higher their price,” said Dmitry Kachkalin, a member of the Russian Society of Amateur Meteorite Lovers. Meteorites are parts of a meteor that have fallen to earth.
Scientists at the Urals Federal University were the first to announce a significant find – 53 small, stony, black objects around Lake Chebarkul, near Chelyabinsk, which tests confirmed were small meteorites.
The fragments were only 0.5 to 1 cm (0.2 to 0.4 inches) across but the scientists said larger pieces may have crashed into the lake, where a crater in the ice about eight meters (26 feet) wide opened up after Friday’s explosion.
“We just completed tests and confirm that the pieces of matter found by our experts around Lake Chebarkul are really meteorites,” said Viktor Grokhovsky, a scientist with the Urals Federal University and the Russian Academy of Sciences.
“These are classified as ordinary chondrites, or stony meteorites, with an iron content of about 10 percent,” he told RIA news agency.
He did not say whether the fragments had told his team anything about the origins of the meteor, which the U.S. space agency NASA estimated was 55 feet across before entering Earth’s atmosphere and weighed about 10,000 tons.
The main fireball streaked across the sky at a speed of about 30 km (19 miles) per second, according to Russian space agency Roscosmos, before crashing into the snowy wastes.
TREASURE HUNTERS
More than 20,000 people took part in search and clean-up operations at the weekend in and around Chelyabinsk, which is in the heart of a region packed with industrial military plants.
Many other people were in the area just hoping to find a meteorite after what was described by scientists as a once-in-a-century event.
Residents of a village near Chelyabinsk searched the snowy streets, collecting stones they hoped would prove to be the real thing. But not all were ready to sell.
“I will keep it. Why sell it? I didn’t have a rich lifestyle before, so why start now?” a woman in a pink woolen hat and winter jacket, clutching a small black pebble, told state television Rossiya-24.
The Internet filled quickly with advertisements from eager hunters hoping to sell what they said were meteorites – some for as little as 1,000 roubles ($33.18).
The authenticity of the items was hard to ascertain.
One seller of a large, silver-hued rock wrote in an advertisement on the portal Avito.ru: “Selling an unusual rock. It may be a piece of meteorite, it may be a bit of a UFO, it may be a piece of a rocket.

The first meteor shower of 2013 will kick off the year’s night sky events this week, giving stargazers a chance to ring in the New Year with a celestial fireworks display.
The Quadrantid meteor shower is an annual meteor shower every January. While this year’s “shooting star” show is not expected to outshine some of the more spectacular meteor showers of 2012, it may give stargazers with clear, dark skies a great start to the New Year.
“Those who brave the cold might see up to 40 meteors per hour, although moonlight will make faint meteors harder to spot,” officials with the Hubble Space Telescope explained in a January skywatching video guide.
The waning gibbous moon will be out in full force during the shower’s peak, but skywatchers in dark areas of the Northern Hemisphere during the wee hours of Thursday morning might still get a decent show. 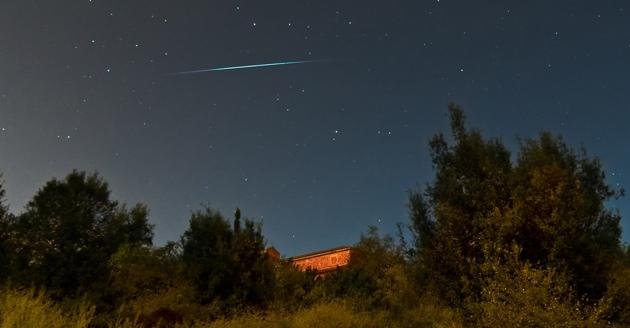 A golf-ball-sized meteor caused a major stir, rocking Wales with a sonic boom

If you catch them at just the right time, a streaking meteor can be a stunning sight in the night sky. But when that meteor contains just a tiny bit of ice, a beautiful light show can turn into a violent explosion, as happened in the skies over Great Britain last night.

The extraterrestrial explosion occurred just over South Wales in southwest Great Britain. The meteor rocked windows and set off car alarms, creating a sonic boom effect. Explained one witness, prior to the detonation “It had a heat trail behind, it was orange and white and very bright, and also seemed very close.” No one was hurt.

Why do meteors explode? Some are loaded with either ice or carbon dioxide, which can be trapped inside of the rock. As the gases boil and expand during entry into the Earth’s atmosphere, meteors can explode in an epic display — with as much force as a hydrogen bomb.