A California couple spotted the edge of an old can on a path they had hiked many times before. Poking at the can was the first step in uncovering a buried treasure of rare coins estimated to be worth $10 million.

“It was like finding a hot potato,” the couple told coin expert Dr. Don Kagan from Kagin’s, Inc. The couple hired the president of Kagin’s, Inc. and Holabird-Kagin Americana, a western Americana dealer and auctioneer, to represent them.

“Since 1981, people have been coming to us with one or two coins they find worth a few thousand dollars, but this is the first time we get someone with a whole cache of buried coins… It is a million to one chance, even harder than winning the lottery,” Kagan told ABCNews.com.

The couple is trying to remain anonymous after finding the five cans of coins last spring on their Tiburon property in northern California and conducted an interview with Kagin.

“I never would have thought we would have found something like this. However, in a weird way I feel like I have been preparing my whole life for it,” the couple said.

“I saw an old can sticking out of the ground on a trail that we had walked almost every day for many, many years. I was looking down in the right spot and saw the side of the can. I bent over to scrape some moss off and noticed that it had both ends on it,” they said.

It was the first of five cans to be unearthed, each packed with gold coins.

He said Tuesday that the couple plan to sell most of the coins, but before they do, they are “loaning some to the American Numismatic Association for its National Money Show, which opens Thursday in Atlanta.”

“Some of the rarest coins could fetch as much as $1 million apiece,” said Kagan. He also said that they wish to sell 90 percent of the collection through Amazon.com and on the company’s website.

“We’d like to help other people with some of this money. There are people in our community who are hungry and don’t have enough to eat. We’ll also donate to the arts and other overlooked causes. In a way it has been good to have time between finding the coins and being able to sell them in order to prepare and adjust. It’s given us an opportunity to think about how to give back,” said the couple.

Kagan and his colleague David McCarthy, senior numismatist and researcher at Kagin’s, met with the couple last April, two months after the hoard was found.

When McCarthy and Kagan told the couple that their bonanza will be in the annals of numismatic stories for quite some time, the couple said, “It would have been quite a pity not to share the magnitude of our find. We want to keep the story of these coins intact for posterity.”

The 17th century hoard of gold coins discovered in Cooney’s Pub in Carrick-on-Suir in January will go on public display in the town’s Ormond Castle this Sunday between 12 noon and 5pm.

A series of free family events will take place around the castle throughout the afternoon to celebrate the first exhibition of the 81 coins outside the National Museum.

Visitors will enjoy a “living history” meet and greet with Black Tom Butler and Lady Elizabeth Fitzgerald, a coin minting demonstration and a display and discussions about the price of war, food and what Carrick-on-Suir was like in the 17th Century.

Coin making and hairdressing are among the activities for kids planned. After Ormond Castle, the coins will be displayed in South Tipperary County Museum, Clonmel from September 17 to October 17. 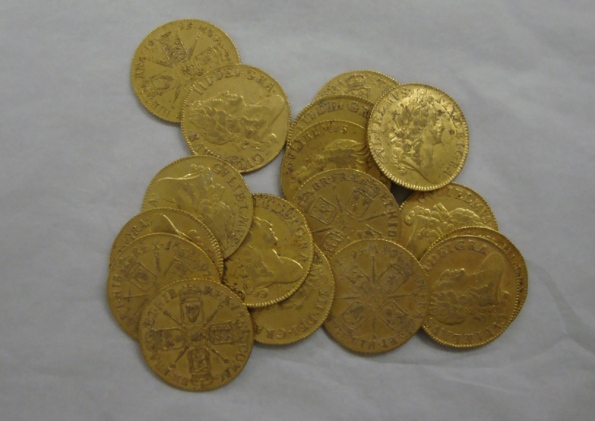