Locked tomb in eastern China may hold key to fate of little-known emperor 2,000 years ago…

A selection of relics from one of the largest archaeological finds ever in China, a 2,000 tomb complex near Nanchang, Jiangxi province. Photos: Xinhua

Chinese archaeologists working on a royal cemetery dating to the Han dynasty 2,000 years ago say the site is the most complete and well-preserved set of tombs they have unearthed, state media reports.

But a key mystery remains: experts hope a locked coffin in the main mausoleum contains relics – an emperor’s seal perhaps – that could confirm the identity of the ancient occupants, according to Xinhua.

The site is large, stretching across 40,000 square metres in a rural area outside of Nanchang city in Jiangxi province. Archaeologists have uncovered eight main tombs and a chariot burial area with walls that run nearly 900 metres.

They believe it is the burial site of Liu He – the grandson of Emperor Wu, who was the most influential ruler of the Western Han Dynasty (206BC-AD25) – and Liu’s wife along with a handful of family members.

Exact details about the era remain sketchy, but it’s thought Liu had a brief but dramatic stint in power – he assumed the throne but was ousted only to later return and be forced out again.

Archaeologists have discovered terracotta figures, musical instruments, some 10 tonnes of bronze coins and more than 10,000 items made from gold, jade, iron, wood and bamboo.

A network of roads and a drainage system can also be seen.

Xin Lixiang, a researcher from the National Museum who is leading the dig, said his team would next turn to the mysterious coffin.

Archaeologists at the site hope a sealed tomb will contain relics such as an emperor’s seal that could positively identify the interned.

“There may be a royal seal and jade clothes that will suggest the status and identity of the tomb’s occupant,” Xin said.

The State Administration of Cultural Relics has instructed the site supervisors to apply for a world heritage listing with the United Nation’s cultural body, Unesco.

The Beale ciphers are a set of three ciphertexts, one of which allegedly states the location of a buried treasure of gold, silver and jewels estimated to be worth over USD$63 million as of September 2011. The other two ciphertexts allegedly describe the content of the treasure, and list the names of the treasure’s owners’ next of kin, respectively. The story of the three ciphertexts originates from an 1885 pamphlet detailing treasure being buried by a man named Thomas Jefferson Beale in a secret location in Bedford County, Virginia, in 1820. Beale entrusted the box containing the encrypted messages with a local innkeeper named Robert Morriss and then disappeared, never to be seen again. The innkeeper gave the three encrypted ciphertexts to a friend before he died. The friend then spent the next twenty years of his life trying to decode the messages, and was able to solve only one of them which gave details of the treasure buried and the general location of the treasure. He published all three ciphertexts in a pamphlet, although most of the originals were destroyed in a warehouse fire.
Since the publication of the pamphlet, a number of attempts have been made to decode the two remaining ciphertexts and to locate the treasure, but all efforts have resulted in failure.
The deciphered message..Message #2…
I have deposited in the county of Bedford, about four miles from Buford’s, in an excavation or vault, six feet below the surface of the ground, the following articles, belonging jointly to the parties whose names are given in number three, herewith: The first deposit consisted of ten hundred and fourteen pounds of gold, and thirty-eight hundred and twelve pounds of silver, deposited Nov. eighteen nineteen. The second was made Dec. eighteen twenty-one, and consisted of nineteen hundred and seven pounds of gold, and twelve hundred and eighty-eight of silver; also jewels, obtained in St. Louis in exchange for silver to save transportation, and valued at thirteen thousand dollars. The above is securely packed in iron pots, with iron covers. The vault is roughly lined with stone, and the vessels rest on solid stone, and are covered with others. Paper number one describes the exact locality of the vault, so that no difficulty will be had in finding it.
The second cipher can be decrypted fairly easily using any copy of the United States Declaration of Independence, but some editing for spelling is necessary. To decrypt it, one finds the word corresponding to the number (e.g., the first number is 115, and the 115th word in the Declaration of Independence is “instituted”), and takes the first letter of that word (in the case of the example, “I”). Note that this method of encryption is slightly different from a standard book cipher. 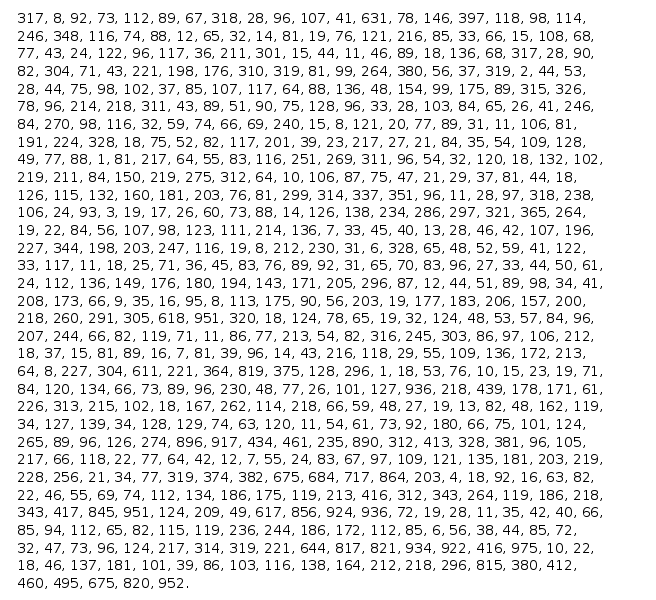