Some GHOST TOWNS OF ILLINOIS 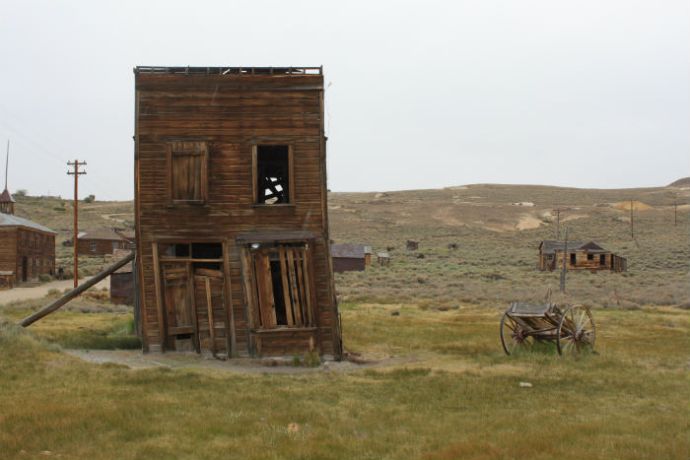 The Sweetin Mansion and its Lost Treasure, Greene County, IL…. 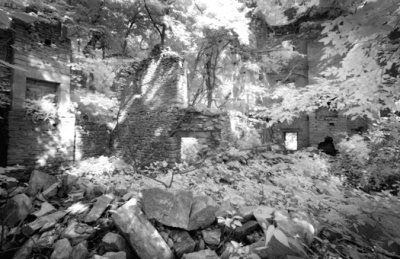 Engulfed by encroaching vines, trees and brush from the nearby woods, the Sweetin Mansion feels as if it’s hiding a dark secret from the world. Built in 1848 by English immigrant Azariah Sweetin, the house is a shadow of its former glory. The ruin sits in a remote part of the countryside in western Illinois. The crumbed limestone walls and broken timbers slowly destroyed by time only hint at its dark past.
Also known as Hartwell Ranch House and “the old stone house,” the manor was constructed with three floors, walnut woodwork, a grand ballroom, three foot thick walls, and the unsual feature of a natural stream running through the basement for a water supply and to keep the house cool. For some strange reason the Sweetin family didn’t move into the house until fourteen years after construction began.
History has it that on July 4th, 1862, a party was held for two farmhands Henson and Isham who had recently enlisted in the Union army. The two began to quarrel. During the argument Isham thought Henson was going to throw something at him so he pulled out a knife and stabbed Henson in the back. As Henson lay bleeding to death in front of the third floor fireplace, a large stain of blood seeped into the stone floor forming a shape of his body. Many years after the event the blood stain could never be removed. The ghost of the young Henson would often be seen in this area when the house was still intact. 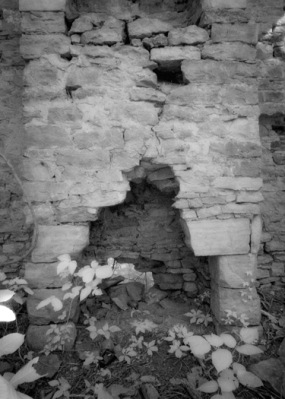 With the country in the middle of the Civil War in the 1860’s many farmers suffered financial hardship but Sweetin prospered during this time trading cattle. Sweetin had a distrust of banks so he began stashing jars of gold coins throughout the property. After a horse riding accident in 1871 Sweetin’s mind was so damaged from being thrown from the horse, he couldn’t remember where he buried his tresaure; his ghost is said to be still searching for it.
Family members had tried in vain to find the gold but where unsuccessful. Treasure hunters have also tried searching, but turned up nothing. There is another legend that two Sweetin farmhands had found the gold and disappeared shortly after Azariah Sweetin had died.
On our journey to this location in June of 2011 the air was hot and muggy when we found the ruin off the main road. We almost drove past the mansion because the vines and trees had hidden much of the outer walls. With a change of clothes we walked through chest-high grass to reach the ruin. (I worried that we could encounter poisonous snakes hiding in the grass.) Large pieces of the wall had fallen and the overgrown trees had made entering the heart of the structure very difficult and precarious. We felt like explorers entering an ancient castle. Inside the structure we saw the stream that still flows through the basement. Large pieces of the wall had disrupted the naturall flow, causing a large pool to form at the inside base of the structure. The large wooden beams that once held the second floor were still set inside their footings. The site was incredible to see but difficult to photograph, with much of the outside structure covered over and mature trees growing on the inside. These obstacles made photographing an exterior and interior overview shot impossible. I was able to obtain only portions of the overall impression this old house ruin made.
We left the Sweetin Mansion very satisfied. The house was well worth the long trip. We can see how legends of haunted ruins have captivated people for years. The sad feeling of a once grand home now destitute makes one wonder what happened to allow its owners to let such a property fade away…

Authorities are investigating the slayings of five people whose bodies were found in a house in the tiny Scott County community of Manchester. A suspect is in custody.
Illinois State Police spokeswoman Monique Bond says the victims were found early Wednesday morning in the southwestern Illinois community, 50 miles west of Springfield. She didn’t have any details on the deaths or the circumstances surrounding the capture of the suspect.
A school superintendent in the area says he was informed by sheriffs early Wednesday morning that the victims had been shot to death. Les Stevens of the North Greene School District says he canceled classes because authorities warned him at the time that the suspect was at large. The district has since been informed that the man was captured.

Illinois Senate Democrats advanced legislation late Wednesday to restrict semiautomatic weapons and high-capacity magazines, pressing forward with new gun control measures in the waning days of the session over the objections of firearms groups.
Amid the developments, the Illinois State Rifle Association issued an “urgent alert” to its members warning them that Democratic legislators were trying to push through last-minute anti-gun legislation.
“There would be no exemptions and no grandfathering,” the group stated in its alert. “You would have a very short window to turn in your guns to the state police and avoid prosecution.”
One measure would ban the possession, delivery, sale and transfer of semiautomatic handguns and rifles. People who currently own such weapons could keep them but would have to register them. The bill would allow semiautomatic weapons to be used at shooting ranges, but those facilities would be regulated.
National Rifle Association lobbyist Todd Vandermyde told lawmakers the bill would restrict about 75 percent of handguns and 50 percent of long guns in circulation today. He also said it would treat law-abiding gun owners like criminals, and is in conflict with Second Amendment rights upheld by the courts.
“I’ve never seen a piece of legislation that tramples on so many court decisions,” Vandermyde said.
The other bill, introduced by Democratic state Sen. Dan Kotowski, would limit ammunition magazines to 10 or fewer rounds.
Those pushing for enhanced restrictions say stricter rules are needed in the wake of a string of high-profile mass shootings — most recently the deadly school shooting in Newtown, Conn. Democratic Gov. Pat Quinn had been trying earlier this year to pass new legislation in the wake of the Colorado movie theater shooting, but lawmakers are taking another crack at it.
Kotowski sponsored legislation in 2007 that would have prohibited assault weapons and .50-caliber rifles. His bill made it through a Senate committee but died on the floor.
Another Democratic state lawmaker, Antonio Munoz, introduced the ban on all assault weapons “designed for war.”
Quinn has repeatedly tried to get stricter laws on the books but has fallen short.
The state Senate got back to work Wednesday. The House plans to return Monday. Both legislative bodies are working against a Jan. 9 deadline — when the state’s new General Assembly will be sworn-in.
Gun manufactures in Illinois have already threatened to leave the area if laws limiting guns are put in place. ArmaLite owner Mark Westrom told FoxNews.com that he’s been fielding offers from at least two others states to move his operation if gun control laws in Illinois are pushed through.