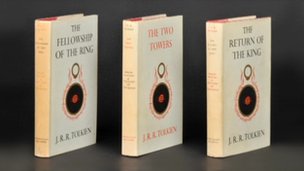 The auction also included one of the earliest manuscripts of The Hobbit, which was sold for £3,200.

Chris Awbery, from Dominic Winter Auctioneers, said the books were from Rayner Unwin of the publishing firm, Allen and Unwin.

He said: “Tolkien fans may not immediately recognise the name, but if they look at the spines of their books they’ll find they are the publishers of the books, from The Hobbit onwards.

“Rayner Unwin was as a 10-year old, given the manuscript of The Hobbit by his father, Sir Stanley Unwin, saying ‘what do you reckon to this?’

“He read it and gave a reader’s report and said it was very good and should appeal to seven to nine-year-olds. He [Sir Stanley] published it, and the rest is history.”

Nine years after “The Return of the King” closed out the epic “The Lord of the Rings” trilogy — and won 11 Oscars — director Peter Jackson is bringing J.R.R. Tolkien’s earlier book, “The Hobbit,” to the big screen. And in the just-released trailer for the first installment of this new trilogy, entitled “An Unexpected Journey,” we see a host of new characters along with some familiar faces. And, most notably, it shows the return of Gollum. Video link below:
http://movies.yahoo.com/blogs/movie-talk/hobbit-trailer-features-return-gollum-170215799.html