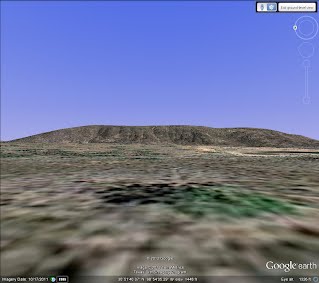 Smoothing Iron Mountain is located in northwestern Llano County and can be seen from Highway 71 between Llano and Brady. It is one of the highest landmarks of the county and is located near the old community of Esbon.

According to legend, a large gang of Mexican Revolution supporters frequently raided cattle herds in the Valley Spring and Field Creek region of Llano County. Many of the farmers and ranchers even claimed that the raids were being conducted by the revolutionary leader, Pancho Villa, himself.

In 1935, an ex-Ranger by the name of George Gregg told a story to a resident historian of Valley Spring about an interesting encounter he and a company of Rangers had late one night around the time of the Mexican Revolution (1910-1916). Gregg stated that he and his comrades were escorting a large shipment of gold from New Mexico to San Antonio and were taking a route through the Hill Country in order to avoid any confrontations with revolutionary bandits along the border. As they entered the Hill Country region, they recieved word that there were several bandit outfits raiding ranches and farms and stealing cattle to be taken down to Mexico in order to support the rebels in the revolution.

As the company of Rangers neared Smoothing Iron Mountain, they recieved more reports from residents that there was indeed a bandit gang of Mexicans operating in the area because they had seen the banditos as well as heard them at night. Knowing that they were going to be reaching the steep slopes of Smoothing Iron Mountain by nightfall, one of the Rangers said that he knew of an old cavern on the south end of the hill that had once been used by an outlaw he had assisted in tracking. He stated that the cave could only be accessed from one trail, was well hidden, and was extremely spacious. The party agreed to head for the cave in order to avoid an unanticipated ambush.

George Gregg later stated the cavern could only be accessed from a trail that began one mile down from the Cold Creek Cemetery and led to an old log cabin that the outlaw had used while he was hiding out in the cave. Continuing up the slope, the caravan reached the flat topped summit and continued to the cabin which was about twelve feet from a natural spring. The cave was located a ledge rock, about 25 feet from the cabin, and was near a two foot high ledge. It was large enough for a six team wagon to ride into it, as well as to turn around inside of it. Inside the former hideout, the Rangers buried seven of the chests and moved some sticks and rocks on top of them just in case the bandits were to discover their hideout.

That night, Gregg reported that the Rangers stayed inside the cabin and indeed did hear the bandits rustle several heads of cattle not far from their location. Concerned that they were going to have an encounter with the rebels, the Rangers decided to leave the seven chests buried inside the cavern and to continue on their journey with a lighter load. They drew up a map to the location and decided that they would return later for it after the bandits had left the region. Because of the increasing amount of violence along the border, the Rangers were never able to return. Gregg, however, did make some personal trips to Smoothing Iron Mountain to locate the gold, but he stated that the ledge had fallen down and concealed the entrance. He was going to return with a larger party to remove the stone, but was never able too.

It is said that the remains of the log cabin can still be found, but that no one has ever uncovered the buried treasure. The spring is said to still flow but only after a rain or thunderstorm. Is there a treasure upon Smoothing Iron Mountain?