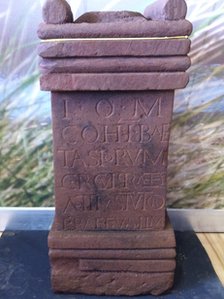 An altar has been discovered at the site of a Roman fort in Cumbria, the first such find for 142 years.

The inscribed artefact was uncovered intact during an archaeological dig on the edge of Maryport.

It was described as in “beautiful condition” and because it was face down in a pit its dedication to the god “Jupiter Optimus Maximus” was intact.

The altar will join 17 others unearthed by landowner Humphrey Senhouse in 1870 which are in the town’s Roman museum.

The manager of the Senhouse Roman Museum described the altar as “rare and special”.

Dated to the 2nd or 3rd Century AD, it was inscribed on behalf of Titus Attius Tutor, commander of the First Cohort of Baetasian, which came to Maryport from what is now the Netherlands.

It was found on Wednesday by John Murray, a volunteer on the dig, who said it “felt fantastic” to be the first person to touch it for at least 1,600 years.

The location was in a large pit which would once have underpinned a massive timber edifice, occupying the highest point of the ridge overlooking the Solway Firth and Maryport’s Roman fort.

Professor Ian Haynes, from Newcastle University, said the find confirmed the theory that at some point the altars lost their significance and were used by the Romans in building work.

Previously, it was thought that the altars were ritually buried.

He added: “Finds like this don’t come up very often, so I think people are over the moon actually.